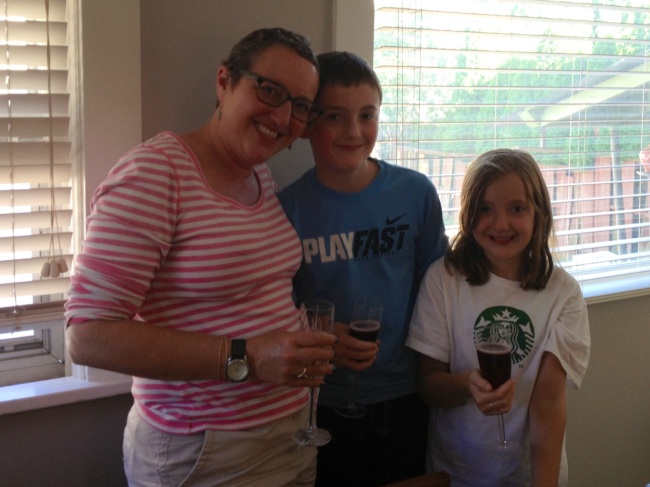 About 20 minutes after my last radiation, I went to pick up my kids at my bud Julie’s house. They had cider and champagne waiting – so nice! Steven was super emotional and made a toast saying: “Thanks for being so strong for us.” Livvie cuddled up next to me. I told them it’s okay to be kids again. Then, they ran away and hid.

Even though cancer is over, I’ll probably keep blogging. Not sure about what exactly. Probably my warped view of the world. In the meantime, I’m unplugging for the rest of the week. See you next week.

1- One of the leaders at radiation called me about a speaking engagement, then stunned me saying: “Every day, we looked forward to the sun coming in. That’s you.” That is so incredibly nice. I almost bawled. If I thought of myself as a planet, I’d probably pick Uranus. Ew. That sounds totally wrong. I like the sun better.

2- Look what me bestie Lisa did. Then, she took me to Barefoot Sage, the opium den for feet. Thank you, Lisa! She’s been there every single step of the way. I didn’t even know it was her birthday yesterday. So HAPPY BIRTHDAY, LISA! You’re so not off the hook.

3- Steven’s friend J said my hair looks like Will Ferrell’s. I’m worried it will fuzz straight up like a Q-Tip. I’d love to have Will Ferrell’s skin right now. I’ll bet he doesn’t look like he stuck his man boob into a vat of acid.

4- I am so grateful to everyone who sent cards and flowers, called, donated money. You have no idea the impact every thing you’ve done has made. Thanks to you, I had enough power to defeat cancer. Thanks for helping me stick around for Brian and my kids. I can only hope to be as good of a friend as you all have been for me. Thank you.